Home Exhibition Stories without borders: how Ukrainian animation conquers Europe and the world

Cartoons – with their universal stories, which are understandable and fascinating for people of different ages all over the world – can become the driving force helping the entire Ukrainian film industry to become a full-fledged player on the global arena. This is what KYIV MEDIA WEEK roundtable discussion on September 19 ‘Animation in Ukraine: how to drive market growth’, organized in partnership with Ukrainian Association of Animation (UANIMA), will be dedicated to.
Today, the animation sector in Europe is developing rapidly. It uses cutting-edge technologies, it’s the first one to test new business models and drives the entire industry forward. And in this context, it is great to see that the current development vector of Ukrainian animation totally matches this European trend.

Just one vivid example of this is an animated feature released this year by Animagrad (FILM.UA Group), The Stolen Princess. At the internal market, it immediately set a record: just in two weeks, it collected the box office of 29,801,235 UAH. The demonstration rights have been sold to more than 50 countries, and in India The Stolen Princess became the first animation feature of non-American production to make it to the wide release. As of late August 2018, the cartoon was seen by over a million people, and it is still being distributed.
But what is Ukraine’s place on the map of European and global animation market? And what is happening on our internal market now? To answer these questions, specialized research ‘State of animation market in Ukraine: current situation, achievements, problems’ was conducted by Ukrainian Marketing Association upon the initiative of Ukrainian Association of Animation (UANIMA). The results of this research will be presented at the roundtable.
The panel moderated by chief editor of the Platfor.ma Yuriy Marchenko will feature respected experts in the field. In particular, Head of the Ukrainian State Film Agency Philip Illienko, Executive Director of UAanimA, producer of the Chervony Sobaka studio Olena Golubieva, CEO of Animagrad Аnimation Studio Yegor Olesov, CEO of UkrAnimaFilm Dmytro Lisenbart, General Producer of niche channels at 1+1 media Ivanna Nayda, CEO at MMD Film Company Roman Martynenko, project manager of the Creative Europe Desk Ukraine Anna Turlo, as well as expert of Ukrainian Marketing Association Valentyna Lavrenenko.
Discussion participants will look at the interaction of animation with TV and film industries and the role of the state in animation industry development in the context of elaboration and adoption of state target program for five years. They will discuss ways for the further development of Ukrainian animation market – both inside the country and internationally, and analyze the European Animation Plan and what it can mean for Ukraine.

This Plan was developed last September by Creative Europe MEDIA upon the CARTOON initiative, Animation in Europe and Annecy Festival MIFA. It proposes mechanisms and solutions for industry development for the following five years and outlines its expectations. In December 2017, the Plan was supported by representatives of national animation associations from 19 countries in Central and Eastern Europe, including Ukraine. They signed the Ljubliana Accord the goal of which is to establish a platform for information exchange, to create networks for cooperation among countries, and to encourage and support sector growth via providing comprehensive information for both local and international audience. 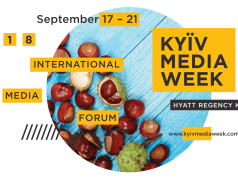