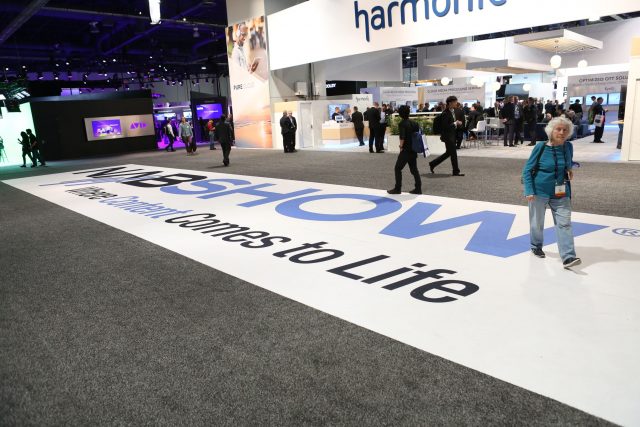 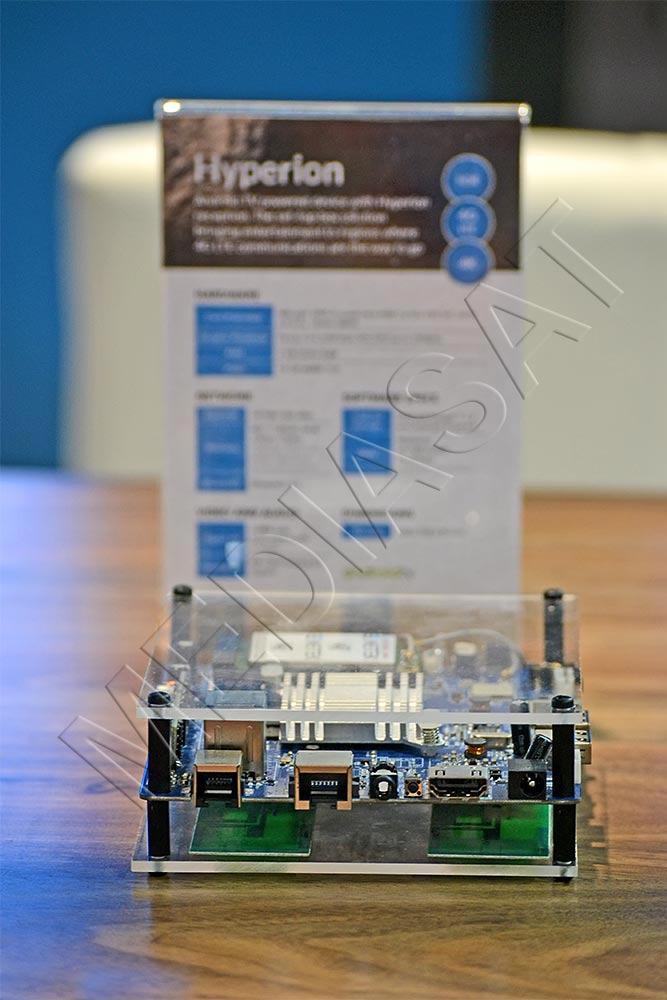 The product line of Atlanta DTH (USA, TM Tolka) is represented by various-purpose STB. So, A1100 model is designed on the M3823 chipset with 256MB DDR3 memory (128MB additional flash memory). The solution runs Linux OS and supports DVB-C/S/S2/T/T2, MPEG-4/H.264, OSD control, Wi-Fi, and CAS. The software is updated via USB, Ethernet or terrestrial signal. There is HDMI.

However, STB is not the only expertise of Atlanta DTH. The company also presented its own patented technology Digital Signature Engine, which allows integrating a digital label into the “player”, which is unique for each device. When detecting content coming from the operator’s network, the digital label identification is performed. In case of the mismatch, the relevant “sanctions” are applied to the “unknown source” of content.

Some solutions like Nature TV by GoShip Electronics offer a projector integrated into STB (DVB-C/S/S2/T/T2).

Monitors and Panels for Broadcasters 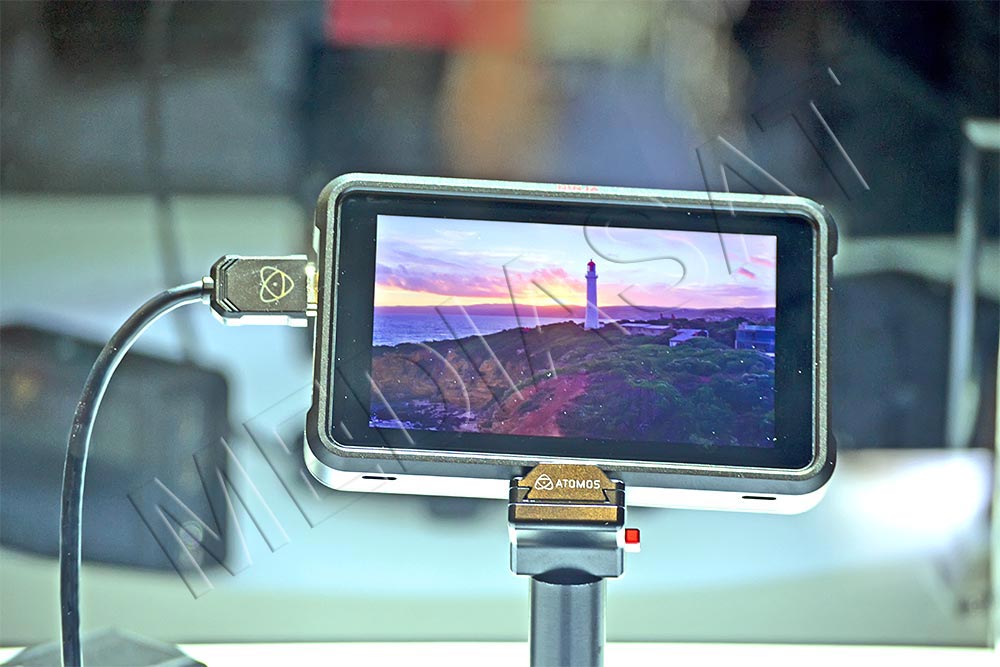 Weighing just 350g., the monitor can be connected to any camera. It supports HDMI, SSD (which provides for giving up internal compression and removing record time restriction). The solution is ideal for DSLR cameras and gaming applications. 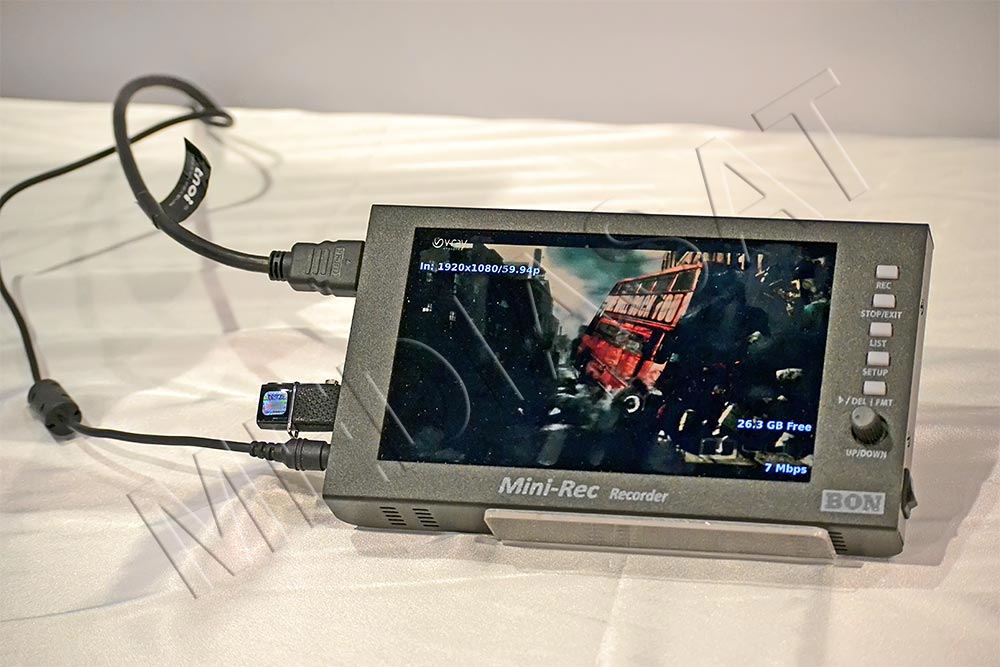 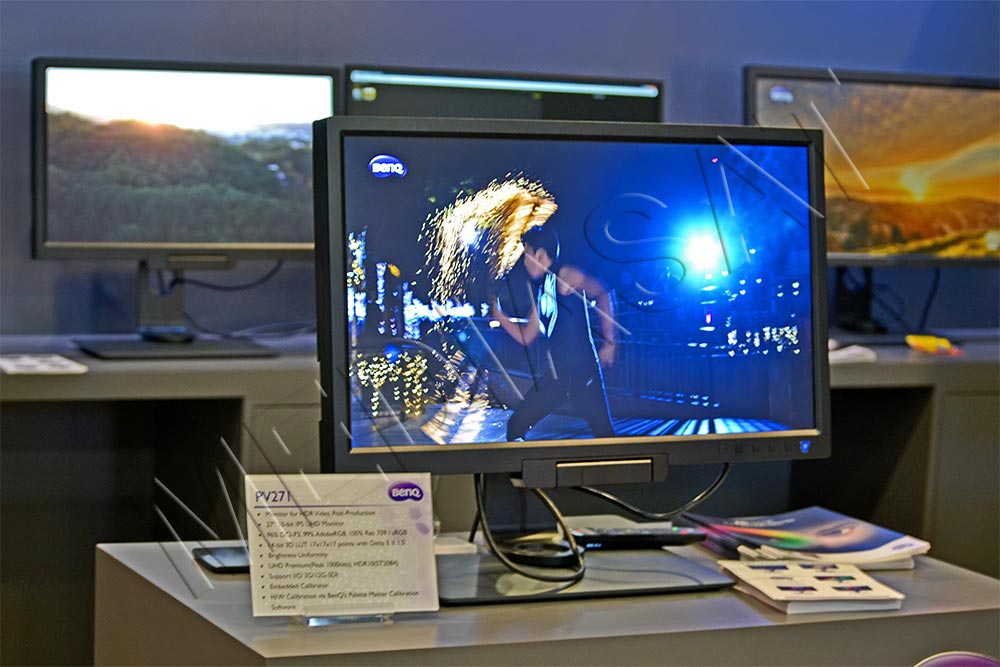 The innovations were also presented by Samsung with its monitor LED 1.2 (IF line), as well as Feelworld and Zhangzhou Seetec Optoelectronics Technology (TM Seetec, China) with FH703 (7″, 4K, IPS, HDMI, coming in mid-summer) and FS173-S4K (17.3″, FullHD, 3G-SDI, HDMI).

Wohler Technologies presented its 5″ HDMI monitor RM-2350W-3G for rack mounting with support for 3G/HD/SD-SDI and signal display in the wave, vector, and histogram forms. 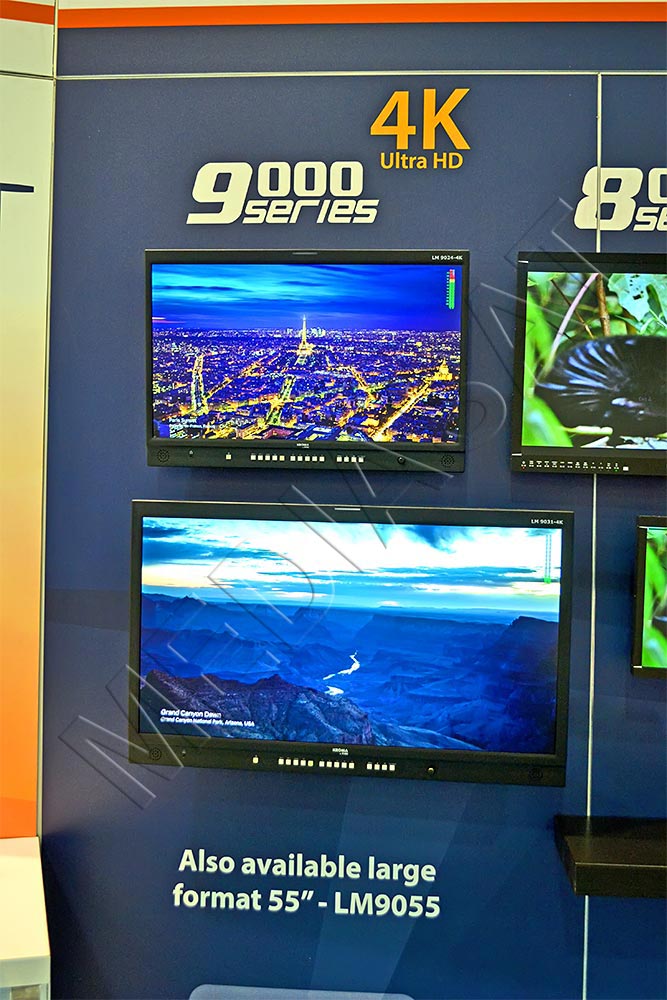 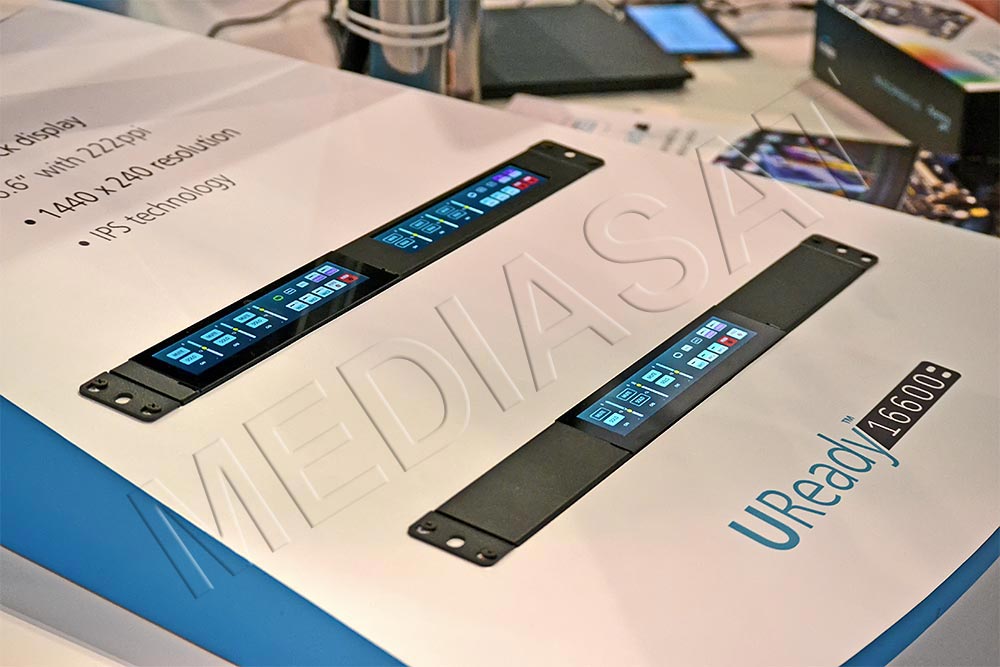 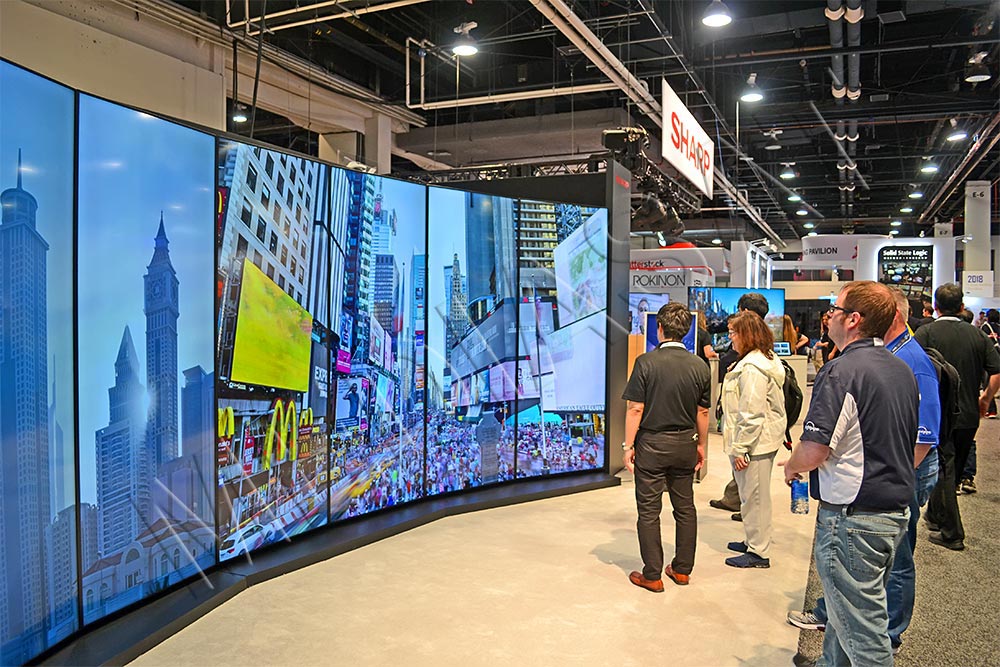 DeepSky (Hong Kong) announced its prototype of the digital panel VEGA (0.93 mm) with the LED density of 1.2 million/sqm and a viewing angle of 178 degrees. The color temperature is settable (factory setting is 6500K). It supports HDMI, 12G-SDI, Ethernet 10/40Gbps. The size of the module is 216×108 mm. It is possible to use both indoors and outdoors (the protection rating is IP65). The operating time up to brightness reduction by 50% is 150 thousand hours. The power consumption is 720W/sqm (HDR) or 1600W/sqm (maximum brightness). The final release is coming in the summer.

The 8K signal test broadcast (Super Hi-Vision/Ultra HD) was started in Japan on 1 August 2016. The official launch of satellite broadcasting in this format is scheduled for December 2018. The technology developer is Japanese company NHK (Japan Broadcast Corporation) that intends to provide 8K-broadcasts during the Olympic and Paralympic Games in Tokyo in 2020. Provisionally by 2030, TV audience will be able to fully enjoy 3D TV.

Among the innovative solutions of NHK, presented in a separate “area of the future” Futures Park, let us single out a few ones. Among them, there is a slow video replay system based on a high-speed 8K-camera (33 megapixels, 240Hz). The solution is able to simultaneously record and playback “slow motion” in 8K/60Hz mode. 8K signal (RGB 4:4:4) is transmitted via a special U-SDI cable (Ultra-high definition, recommendation ITU-R.BT.2077).

Another NHK’s innovation is an IP broadcasting system with mezzanine signal compression. 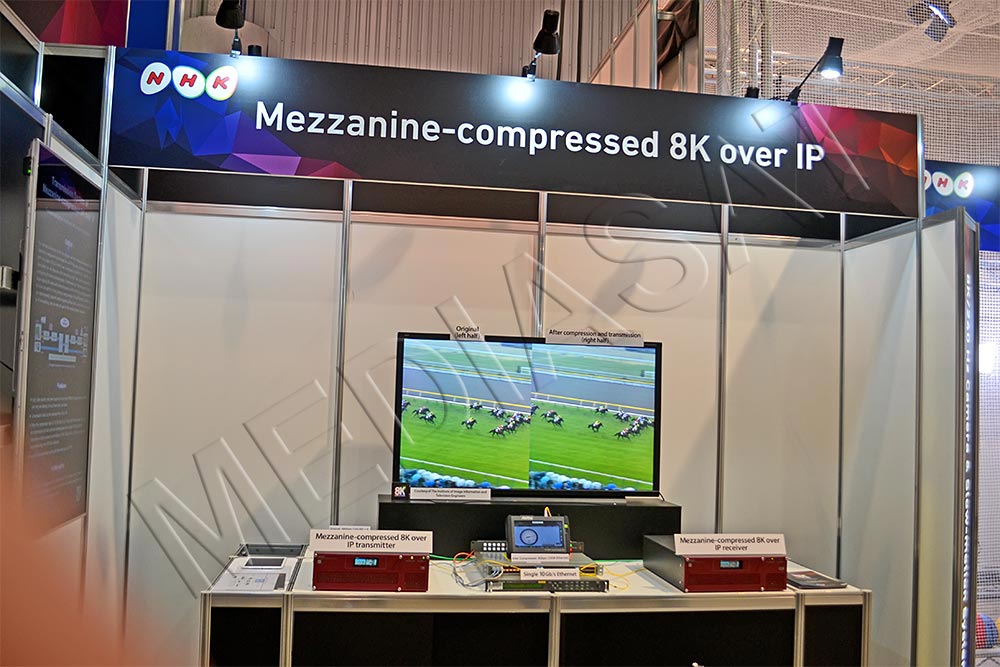 Today, the following two options are most commonly used: an uncompressed signal and a signal fully compressed and ready for broadcast. But optionally there is one more method, the “medium” one. The signal (bitstream) is slightly compressed to become “convenient” for broadcasting in many DTV networks (some 45 Mbps are required). It is this “mezzanine” option that NHK offers.

The solution is designed for the remote production of TV shows (e.g., to transmit signal in the highest quality from stadium cameras to a TV studio). This requires a bit less bandwidth than for an uncompressed 8K signal. At the same time, the video keeps its high quality subject to real-time processing, and the above option also provides a low delay. Thus, due to Ethernet of 10Gbps and multiplexing, the solution allows transferring 8K-video (60Hz) over long distances without any need for expensive auxiliary hardware.

Unfortunately, the virtual reality (VR) technology is far from perfect in terms of image quality, which is often too pixelated (those who remember the 1990s and popular then CGA-displays, will understand what it is about). Most “monitors” in VR glasses are characterized by a low resolution. To address the above problem, NHK first presented its VR based on OLED microdisplays with 8K support (the presentation was held along with Semiconductor Energy Laboratory). However, to watch the picture, each visitor put on “napkins”. Because the queue of those who wished was similar to an army of “Zorros” wearing white masks. The showcase was an image of Japan Aerospace Exploration Agency.

8K technology is not just about broadcasting. High definition video is in demand in healthcare (surgery), education system, and video presentations of museum showpieces, etc. Keep in mind video surveillance systems and security (enlarged HD-video fragments are not helpful due to blurred image). Today, NHK’s “pool” accounts for a wide range of regularly updated content: ranging from the ballet “The Nutcracker” and the Olympics, up to national parks, galleries in the Louvre, etc. 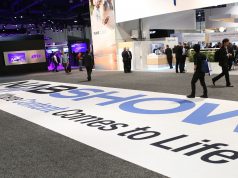 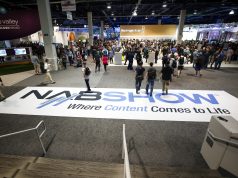 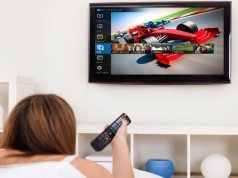