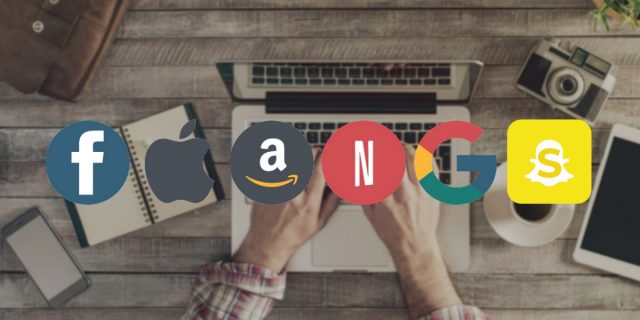 A busy KyivMediaWeek (KMW) is over. Once again, the media forum brings together the Ukrainian and international community of experienced media industry experts, media leaders, advertisers, journalists, representatives of creative professions, media companies and broadcasters. This year, four September days in the Ukrainian capital were pleased the guests from China, Korea, the United States, Israel, Moldova and other countries with a warm weather which is not usual for autumn.

On September 17, the first day of the forum, David Ciaramella, a communications manager of the international media consulting company K7 Media in Manchester that conducts analytical research on global trends in the content industry for major global media brands, did a presentation on the mysterious FAANGS.

What are  the FAANGS?

FAANG is an acronym for the market’s five most popular and best-performing tech stocks, namely Facebook, Apple, Amazon, Netflix and Google. By the way, FAANG was born out of the original acronym, FANG, which did not have Apple. It was included when CNBC’s Jim Cramer coined the term. In the speech of David Chiaramella, another English letter “S” joined FAANG. It is the first letter which the name of the company “Snapchat” begins with. It is one more player in a digital sphere of the modern world media industry. Today, however FAANGS is not only technology; online video platforms are becoming content distributors and trendsetters of the global television industry. Facebook, Apple, Amazon, Netflix, Google and Snapchat are actively buying content, conquering new territories and building business strategies, focusing on user needs.

Facebook was the first of FAANGS, David considered. He noted that Facebook was not a television company, but a social media platform for most. Not everyone knows that it has its own personalized streaming video service Facebook Watch.

“A year ago, the Facebook Watch was first seen by American users of the social network. Since the end of August, the original video content on the Facebook site has become available worldwide. A platform for every creator and show. This is how service owners market themselves.

Today, Facebook has already released the tragicomedy “Sorry For Your Loss”. It was released on September 18th. It also broadcasts its news, sports programs, and various reality shows, such as “Help Us Get Married” where the wedding dress for the bride, the wedding venue, and other wedding attributes are selected, being based on weekly online voting.

The main Facebook Watch problem, according to David Chiaramella, is both a less secure area for advertisers and a platform promotion. In addition, according to a survey conducted last month in America in a fusion group, 50% of an adult users have never heard of Facebook Watch, 24% have heard of the TV services, but have never used it.

“Its potential consumers are social network users. They enter the platform, look through the news and leave it not staying for a long time to watch the news or TV series on Facebook Watch”, the speaker said.

Also, according to the speaker, the BBC podcaster called Facebook Watch the first platform that is not funded by the US budget.

David conditionally called Apple a social media platform like Facebook, but also added that it is mostly a tech company. Speaking about the Apple Music service, K7 Media manager stressed that at the moment the number of users who have paid a subscription is 40 million. “This shows that they have already had a physical mass to capitalize on a massive audience where they actually launch a streaming service”.

This year, Apple signed a contract with Spielberg, who plans to reboot his cult classic anthology of the 80s “Amazing stories”. It is assumed to be one of the first series that will be developed as part of Apple’s plan to create original programming.

In June, the company has announced co-production and international collaboration with Canal +. It has given a series order to “Calls”, an English-language adaptation of the French short-form series Canal+.

Direct, sequential ordering continues to be replenished because Apple keeps on creating content for the original video platform that has not yet been created.

Amazon is one of the largest and most global SVOD platform, but firstly it is a retailer. It provides subscription content to the Prime Video service. On June 2018, the Prime had 100 million subscribers. Amazon provides various services. The percentage of the recent survey showed that 80% of customers use Amazon for goods, 10% for listening to music and 10% for watching videos. David also counted among the attenders of the presentation several raised hands of the Prime Video subscribers.

In 2018, Amazon has spent $ 5 million on original programming.

There are the adaptation of the series “Jack Ryan” among the new films that can be viewed with a subscription to the Amazon Prime, there are also the franchise series “The Lords of the Rings” etc.

A guest from the UK also noted that Amazon is now actively looking for new territories to broadcast the content of the original production to consolidate the market and to strengthen its position in the international arena. Thus, they will go beyond the English-speaking audience.

So, in March, Amazon has entered the Indian market with new reality shows such as “Remix and a dating show “Skull and Roses”. The Indian market is the second largest market after China.

Amazon’s original programming is sold in 15 countries around the world, such as Indonesia, China and South Korea.

In addition, to develop a business strategy and strengthen its position in the category of sports programs the company has launched the first season of the new show “Eat.Race.Win”[g]. It tells about the kitchen on bike races, a behind-the-scenes of “Tour de France”, and what kind of “fuel” is needed for the human body to maintain endurance during 21 days of the race.

Netflix is a digital video streaming. It has a world video library that includes television and gaming, as well as films. The company planned to spend $8 billion on the original programming, production in 2018 that is more than CBS and HBO. They have sold more original shows this year than other major US networking companies.

Netflix says that 85% of the $8 billion per year goes toward original programming with about 700 new episodes produced by the end of the year. By 2nd half of 2018 the platform had around 130 million subscribers globally. And only 5 years have passed since Netflix produced the first commercial drama “House of cards”[h].

Looking back, we can recall one of the successful Netflix co-productions and the 4 channel “The End of the F *** ing World”. The series was broadcasted on channel 4 in the UK in 2017 before becoming the most popular multi-part film ever broadcasted on the Netflix platform. In July, it has already announced about the release of the 2nd season of the beloved series.

The new format, which the company is investing in this year, is unscripted series. The first original unscripted show from Netflix was the “Chef’s Table” documentary culinary series. The company seeks to occupy niche topics on linear TV – cooking, design, etc. The last of the sensational releases was also the 8-series “The Dark Tourist” with journalist David Farrier, Netflix documentary series about the phenomenon of dark tourism.

Also, a guest from the UK stressed that it is well known now that there is no family format in the platform.

“Google, the last of the traditional FAANG”

“First of all, Google is a search engine, but with youtubers it is also a buyer and a producer of the programming. The new YouTube Premium subscription model (previous name YouTube Red) provides users with unlimited access to music streaming, as well as other channels and a premium show without ads for $ 9.99 per month. Such a package is available to subscribers in the US and the UK, according to the speaker, (but, in general, it can be used in at least 17 other countries). This year, Google began to change its age policy, since 14-year-olds will not be able to pay for a subscription”, the speaker suggested.

At the moment, the company is hiring high-class professionals such as Bear Grylls to take part in various shows and episodes in different parts of the world, and is also looking for socially-oriented, inspiring programs. The YouTube platform now focuses on music shows of various formats. The company is also expanding in India and Japan.

Well, the latest global TV streaming service which David Chiaramella told about in the presentation was Snapchat. It is a multimedia mobile application for sharing photos and videos. The platform is designed to communicate mainly with young people under 25, and global media giants are seeking to tie up deals with a digital platform to show snack videos to this target audience.

According to the speaker, interest in the platform is caused by a multimillion audience of the mobile application users. Thus, the Time Warner transnational media corporation concluded a deal for the production of Snapchat-show for $100 thousand with the platform. American companies, MGM and NBC, as well as TV channels ESPN and MTV also signed an agreement with it. MTV recently recast “the Cribs” in the platform.