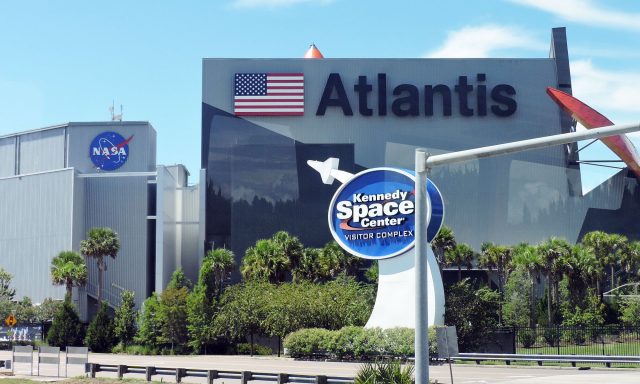 Kennedy space center is a place to impresse, perplexe and, of course, remains in memory.

When I’m telling about the visit, to be honest, I don’t know what to say first. Maybe, I should mention that it is a very serious and important place, equipped with the cosmodrome, the mission control center, NASA and SpaceX facilities,  very close to the USA Air Forces Base on Cape Canaveral, where  rockets, satellites and other temporary inhabitants of the Space are launched.

All the advanced achievements of the US space industry are here: the training center of the program “Apollo”, the legendary shuttle Atlantis and the Garden of Rockets, they are real,  not fake. They smell like Space.

The center is open to visitors and there are a lot of cosmic entertainment (simulation of shuttle launch, piloting of spacecraft, space food, which is, probably, the same one that astronauts eat…). This is a huge area being a nature reserve, alligators live in the small lakes between the buildings   and sometimes, they say, get out on the land. Perhaps, they hope to be taken to Space 🙂