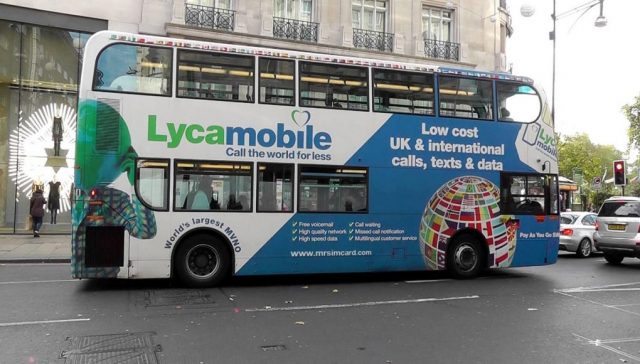 The virtual operator LycaMobile’s entering the Ukrainian market can be recognized an event both milestone and significant. Even though this pancake turns out lumpy, it has expanded the limits of the possible anyway. And this is always important.

So, the virtual operator does not have its own license for frequencies, therefore, it should first reach an agreement with one of operating licensees. At the same time, and this is important for distinguishing among fully-fledged MVNO and various co-branding projects on the mobile market, a virtual operator provides services to end users on its own behalf, and not on behalf of host operators (partner operator, MNO). That is, the MVNO’s website, its marketing materials, contracts, etc. should mention just its legal entity. This is how the “General Terms and Conditions” of LycaMobile’s corporate website looks like.

In addition to transmitting devices, i.e. antennas, virtual operators may not have other facilities of the network radio subsystem (towers, base stations), switching units, individual or all OSS/BSS elements. A degenerated case supposes that the “virtual operator” does not have anything at all, except its marketing, CRM and settlement account. Even the national destination code (NDC) can be common to the host operator and its “virtual one”, as is the case for LycaMobile using the Trimob’s code, i.e. 091.

Contrary to popular opinion in Ukraine, neither Jeans nor djuice, nor “Mobilych” and “Ecotel”, nor operating “Yezzz!” have no relevance to the virtual operator model, since these products were offered on behalf of the same “Kyivstar” and UMC. It was just a mimicry, common for Ukrainian companies, an attempt to take advantage of a trendy topic, and to distance themselves from the existing perception of operator companies.

The only fully-fledged operator of this kind was privat:mobile, set up back in 2005 by the“Privatbank”’s experts in the network of the “Ukrainian Radio Systems” bought (or rather, “nicked”) by the “Privat” Group. The “Privat” implemented own billing, which was the reason for the project’s swift closure. As soon as the URS passed to new owners, it turned out immediately that it was impossible to move that in-house billing to the new operating environment without excessive costs. It should be remarked, that was the first MVNO in the world, launched by a banking institution.

In the case of LycaMobile, there are relevant indications of a virtual operator. According to its representatives, the company invested in its own billing and a number of other BSS-subsystems.

LycaMobile’s positioning revolves around the idea of friendly and favorable tariffs for international calls and roaming. Getting an operator’s start package at the press conference, I made some calls to colleagues and relatives abroad. I called my friend in Peru, dialed several numbers in Canada and Russia. The sound is as good as in GSM-networks, even when the interlocutor was in the countryside or on the trip. However, nothing surprising, since there were applied a usual GSM-technology.

Everything is also OK with the new operator’s prices. They are close to the tariffs for international calls via Skype, which I have been using for many years, when I need to get a person surely and talk to him in quiet, without focusing on quality and coverage of his WiFi/3G/4G networks while calling. It results impossible to compare tariffs directly, since Skype uses a connection fee to camouflage the actual price of calls. The nominal 2.3 ¢ for calling Lima with a connection fee of 4.9 ¢ and per-minute billing easily turn into 10-15 ¢.

As far as I can judge, LycaMobile has a fair per-second billing. The project manager Sten Polyakov reported that the company decided to give up a connection fee, despite its “marketing potential”. The data transmission billing is the per-kilobyte one.

LycaMobile has a very nice feature, which I first saw at the Belarusian Velcom. After each billed action, the screen displays its details, including call or data transmission duration, the amount of debited funds, and so on.

This option is most valuable due to eliminating such an important factor of shit marketing in mobile networks, as the subscribers’ lacking effective tools to track the status of their account. 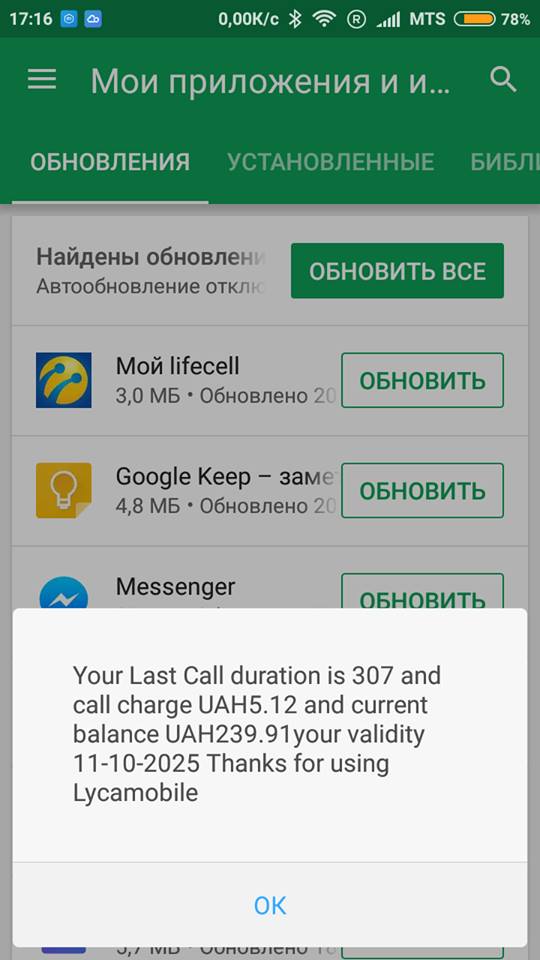 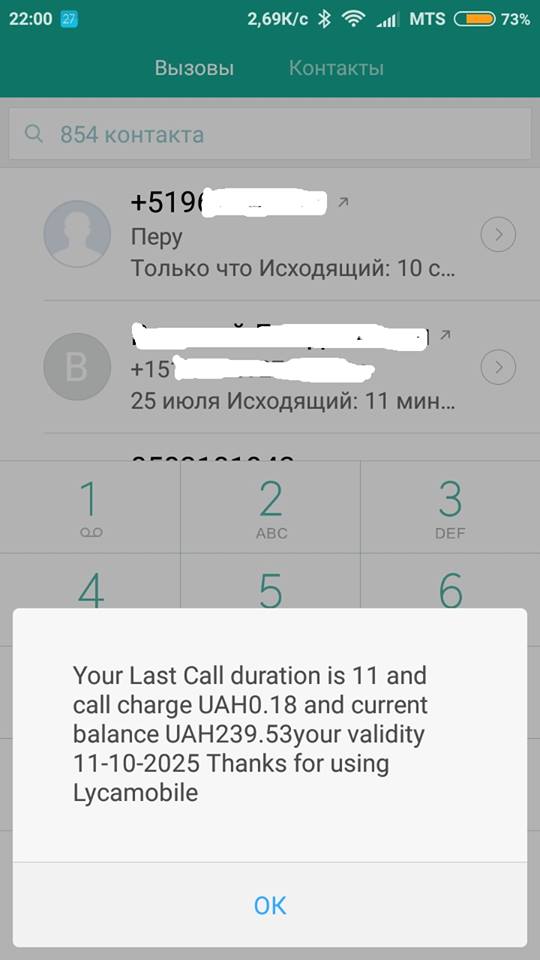 In general, LycaMobile’s offer covers the niche of international calls and calls abroad, when very popular free-of-charge VoIP services like Viber, Skype or Telegram turn out useless for some reason. And they are useless not so rare. An acceptable quality of communications in VoIP-networks requires a high-speed access to the Internet. And not just the high-speed one, but meeting certain requirements in terms of jitter, packet loss, delay, etc. Harrow and alas, free public WiFi networks are not available in any place, and buying a local SIM card is not always a relevant solution in view of various reasons.

The enthusiasts’ popular speculations about the rapid coverage of the entire surface of the Earth with satellite, stratospheric and other WiFi networks of Internet giants like Google or Facebook, and the inevitable, in this regard, declining age of traditional GSM operators, fall short of the mark. I am not going to repeat them again, just confining myself to the statement that we will cross the bridge when we come to it. In the meantime, the availability of real cheap mobile calls in other countries remains topical in many ways. So, LycaMobile is quite an adequate response to this demand.

At the press conference devoted to the new operator’s launching, the famous Ukrainian businessman Vladimir Kosterin came out his new and unexpected colors. As it turned out, he was the initiator and, as they say, the facilitator of LycaMobile’s entering the Ukrainian market.

Mr. Kosterin’s public speech draws attention to the frequency of mentioning risk management and related concepts. Moreover, after his real emigration to Switzerland in 2010, he established there a fund “Risk Reduction Foundation”. So, this person pretends being not only familiar with this area, but has been engaged in it professionally for a long time. At that, for me, the question is still open: how well he knows the telecom market, its risks and threats, how relevantly he assesses them. Some indications give me a reason to believe that he is not so good.

The new operator’s offer strikes with an impressive number of prepaid services. They are comparable to the tariffs of their native Trimob network, but they significantly exceed the Vodafone’s ones, which services LycaMobile’s SIM cards outside the Trimob coverage.

Given an extremely limited coverage of the latter, there is a risk that LycaMobile subscribers will spend most of the time in national roaming, i.e. in the VK Ukraine’s network (Vodafone TM). Why does Vodafone need it? That is a good question.

The very model of providing mobile services as a virtual operator has proved to be nontrivial and difficult to implement. A good subject overview is here, but in short, among some hundred projects there are just few successful ones, not 50% or even 20%.

Indeed, in LycaMobile’s case there is a successful business experience in couple dozen countries. However, the risk of failure is different from zero. A number of negative factors are featured in Vsevolod Nekrasov.’s publication. One of the most obvious factors is, of course, an uncertainty about Rinat Akhmetov’s telecom assets, including Trimob and Ukrtelecom.

Much depends on the expectations of LycaMobile’s shareholders. I would not be surprised if they are very limited. But what are the expectations of SCM’s shareholders? At the press conference, Yuriy Kurmaz announced Trimob’s investment in the sum of a couple of million dollars. It seems little, but Ukrtelecom is far from Kyivstar in terms of its investment potential. “In the Ukrtelecom’s accounts for the past year, Trimob is listed as a “noncurrent asset for sale”. The revenue from the mobile operator’s performance has been declining year by year. By the end of 2016, it just amounted to UAH 129.5 million (given a cost of services of UAH 375.8 million)”, as Liga.net informs.

It is worth remarking that Ukrtelecom is traditionally not very active (to say the least) in terms of innovations and succeeded in shelving a number of promising initiatives. I can recall the convergent services based on the Intertelecom’s network, when Ukrtelecom subscribers got an option to use their common local phone number in the mobile network. Today, this service would give, for example, an opportunity to minimize damage from telephone cable thefts that became epidemic.

Whatever it was, we have a valuable example of implementing a little known business model. Among other things, the LycaMobile’s case shows a possibility of setting up a MVNO within present regulatory environment, without waiting for changes in legislation, “authorities’” approval and pigs beginning to fly. However, the presence of the Chairman of the National Commission for the State Regulation of Communications and Informatization (NCCIR) at the press conference and his speech devoted to launching new operator leave no doubt in support of this project.

For the time being, the network is preparing for a commercial launch, scheduled in a couple of weeks. The support phones remain inactive so far, while the errors on the corporate website and other loose ends are subject to correct as well. The SIM cards distributed at the press conference are operational, and the other ones can be ordered on the website. As far as we can judge, there is observed a systematic preparation to start.

The market entry of an operator offering a fair and transparent billing will be an important precedent for the entire market. I wish the new operator success and good luck.