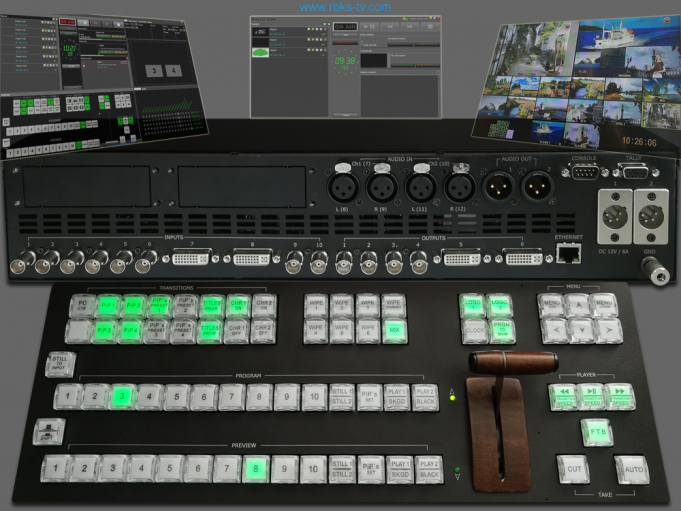 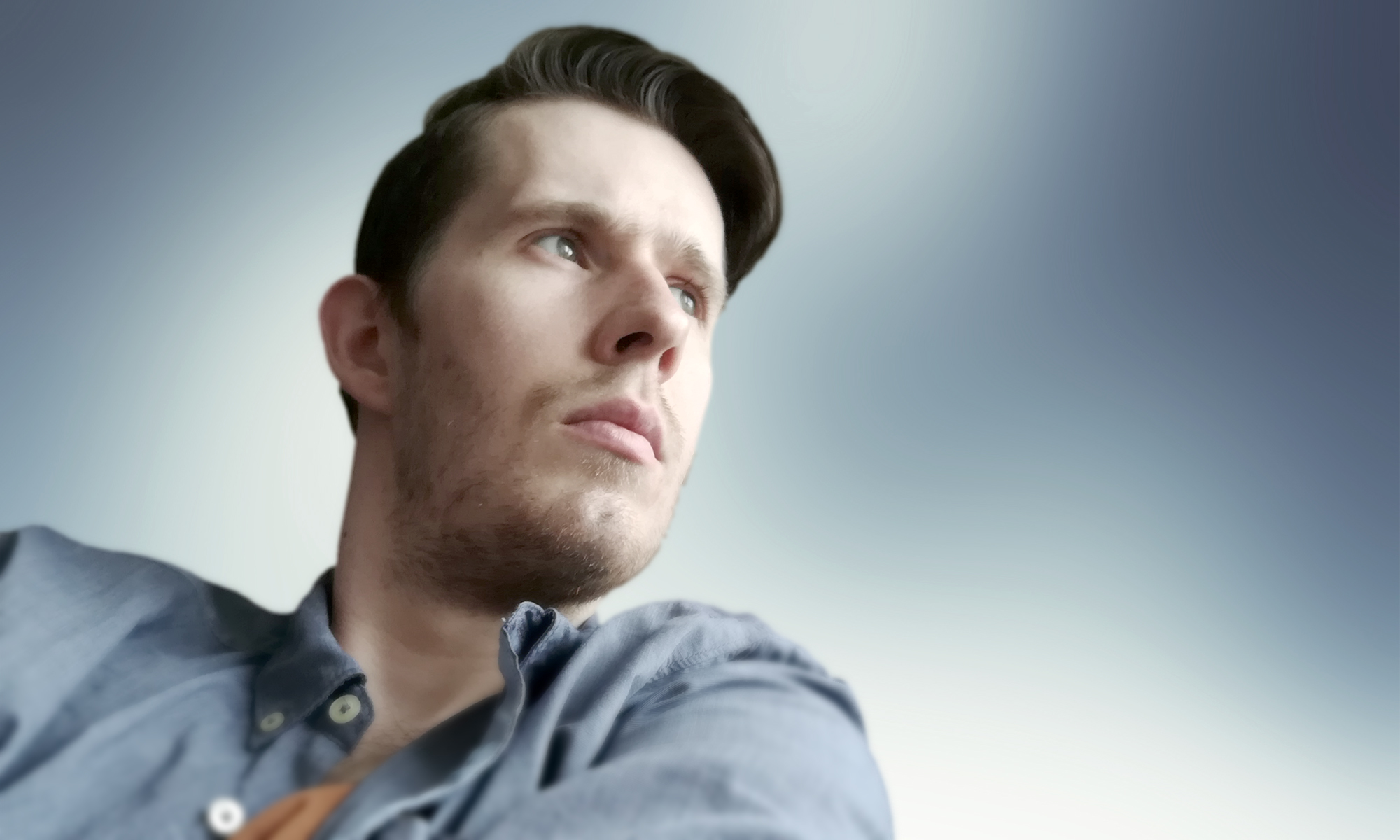 It is a  multi-purpose device for linear editing, equipped  with functionality that covers the needs of  a conventional operator studio to a studio on a TV channel… Having heard about the excellent functionality of this device, we turned to Volodymyr Perevertailo, engineer of radio and television of the “ROKS” company, to get the details firsthand.

How did the vision mixer appear on the market?

Our offer to the Ukrainian consumer was the result of partnership with the company Digital Video Lab. The vision mixer was presented at the international exhibitions such as CABSAT in Dubai, IBC in Amsterdam, etc. Currently this device has already positively proven itself abroad.

Who will be interested in the Video Mixer / Switcher HD v1.0?

It will be interesting both for stationary studios and for mobile television stations due to integrated  functions, features and additional units integrated in mixer. Excepting main consumers, the Video Mixer / Switcher HD v1.0 will be useful for studios where linear broadcasting is required: for live broadcasting of sport events (for example, football or basketball matches), where  shooting the event with several cameras from different angles and show the result on large-screen display is requires.  It is also important for presentations, conferences, interviews, business trainings, parades, concerts, etc. In this case, you are able to see all the details even if you are far from the stage or speaker. Respectively, all viewers are satisfied with such kind of event organization.

Moreover, the Video Mixer / Switcher HD v1.0 is suitable not only for small or medium, but also for a large studio. In the last case it can be used as a backup option.

What are the functions of Video Mixer / Switcher HD v1.0? What are it’s advantages in front of the others?

First of all, this is the “MultiView” mode: if some time ago you had to use separate monitors for each picture (for viewing images from each camera and the on-air signal), now we have the possibility of using just one monitor to see all input sources and output signals at once. The Video Mixer / Switcher HD v1.0 has built-in “MultiView” mode, you have not to buy it separately. In addition to what has been said, the advantage is that MultiView can be assigned to any of the mixer outputs, with one output (the last one) enabled by default for this mode.

Another great advantage is the ability to use the most common monitor with DVI / HDMI input for visual controlling of cameras and other signal sources. (If “MultiView” mode is assigned to the SDI output of video mixer,  you will need monitor with an SDI input of course.)

Also Video Mixer / Switcher HD v1.0 provides a background replacement mode (blue / green) – chromakey effect. Devices from other manufacturers have manual adjustment for this effect, as a result you have to adjust all the parameters by yourself, this is very tedious and time consuming, you have to work on one parameter then go to the next one and set it, afterwards, the previous must be corrected again and so on (and there are a lot of such controls and parameters for chromakey effect in that video mixers). Developers of the Video Mixer / Switcher HD v1.0 worked a long time to obtain the optimal chromakeying for any blue / green screen in auto-mode. It makes your work quite fast and easy – just apply the effect to any source!

In addition, the Video Mixer / Switcher HD v1.0 has two independent chromakey channels. As a result you may operate with two photo/video sources using chromakey effect.
And that’s not all. You also can work with PiP effect (picture-in-picture, four windows (photo/video sources) on background video). Two among four windows can be scaled to a half-screen! This is convenient for broadcasting of conversations, discussions, etc. This function is not available in other similar products of the same segment on the market.

You can add the clock to the video. The mixer has built-in transition effects (wipes), has quick and slow camera transition (for slow one you can use the T-Bar separately) and transition to the dark screen. At the same time, there are built-in pattern generators in the vision mixer: black field, color bars, 1 kHz sound tone. So you will be able to configure Video Mixer / Switcher HD v1.0 even in “field conditions” and as soon as possible.

You may overlay titles over the main signal. The source of titles is the computer. The software is free, provided in the kit. Any super computer is not needed for this purpose, just a regular one. The main thing is that the video card must have HDMI output and the hardware must support DirectX9.0c.

By the way, I’d like to note also: for working with video mixer a computer is not important. Considering similar devices, which work only with PC, any PC error leads to “distortions” in the on-air signal. Meanwhile in our device PC may not be needed if you do not use a virtual console and do not overlay titles. (Preparation (initial setup) of video mixer is usually carried out on PC, and the further work and the on-air signal are provided exclusively by Video Mixer / Switcher HD v1.0 hardware. Therefore signal, transitions and effects are not influenced by possible PC crashes!)

Thus, it is cheaper to take Video Mixer / Switcher HD v1.0 and work without buying expensive PCs, monitors, consoles (which can be more expensive than the video mixer itself)… By the way, our console is in the video mixer kit and the main computing capabilities are provided by hardware of video mixer.

Video Mixer / Switcher HD v1.0 also has built-in memory (to store logos and images, the last ones can be installed instead of some inputs of video mixer and used as independent signal sources as well as signals from cameras for further video mixing). Video mixer supports the high-speed memory cards up to 256 GB, on which you can store images and video files. Then you may play them on air, using two more functions of the video mixer – video players and slides.

Tell, please, about the ROKS Company. What directions do you develop and plan to develop?

The ROKS Company has been founded in 1994. Having begun with development of satellite television subscriber receivers market and having been fixed on this direction, the company constantly expanded and continues to expand the area of production and research interests, covering related industries. The company has become the dynamic commercial and industrial enterprise which pays much attention to scientific research in the field of the communication equipment development and production, multipurpose microwave devices for creation of terrestrial television broadcasting systems MVDS, which helps it to be the leader on the technological area. The ROKS Company uses advanced technologies and has qualified specialists. Now our equipment works in such regions as Europe, Middle East, Asia, and Africa.

We have many plans for business and technical development. We do much for cooperation with local and foreign partners. For this purposes our engineers have developed a number of offers in the form of technical and business projects, first of all for development and deployment of the interactive multimedia systems which are capable to become the main networks for data broadcasting and to bring the population of our country and others technologically developing countries closer to modern information society advantages. We are open to mutually beneficial cooperation! Currently our partners are the following: Ukrainian company Crypton, the Spanish company Televes, the Swedish company SMW, the Korean firm MMCL, the Chinese companies Shanghai HeXu Microwave and Colable Electronics, the German firm RF-Design and the British company ETL and of course the Moldavian firm DVLab together with which at the moment we’re opening for ourselves a new direction– the studio digital video mixers.

Video Mixer / Switcher HD v1 has an intuitive management, is equipped with two “Chroma Key” channels (with original auto-settings), with built-in MultiView for watching all signals even on a simple user’s monitors… And this is just the beginning from the list of main features and advantages of the video mixer, which also includes the following:

Each of these blocks is always ready for operation and has the same roots and capabilities as any other input, and there are respective buttons for them on the console in the Preview and Program lines.

Video. Considering all blocks, the video mixer has 17 inputs, including 8 SDI (BNC connectors) and 2 HDMI (DVI-D connectors). At the same time, to work with analog sources, it is possible to configure 4 inputs (numbers from 3 to 6) as CVBS.

Audio. The video mixer has 4 analog audio inputs (XLR connectors), which can be configured as 2 stereo or 4 mono inputs.

Video. 2 HDMI outputs (DVI-D connectors), one of which is constantly used for MultiView mode. As we said earlier, for working in this mode you may use conventional user’s monitor.

The video signal in the video mixer is processed with 10-bit resolution and 4:2:2 digital sampling.

Audio. In addition to embedded audio in a digital video stream, the mixer contains 2 separate analog audio outputs (XLR connectors). There is the possibility of adjusting the dynamic range for digital and analog audio. Input and output signals can be selected by user with nominal levels of 6, 12, 18, 24 dB.

Audio signal processing in the video mixer is carried out with 24 and 20 bit resolution (set in the settings). 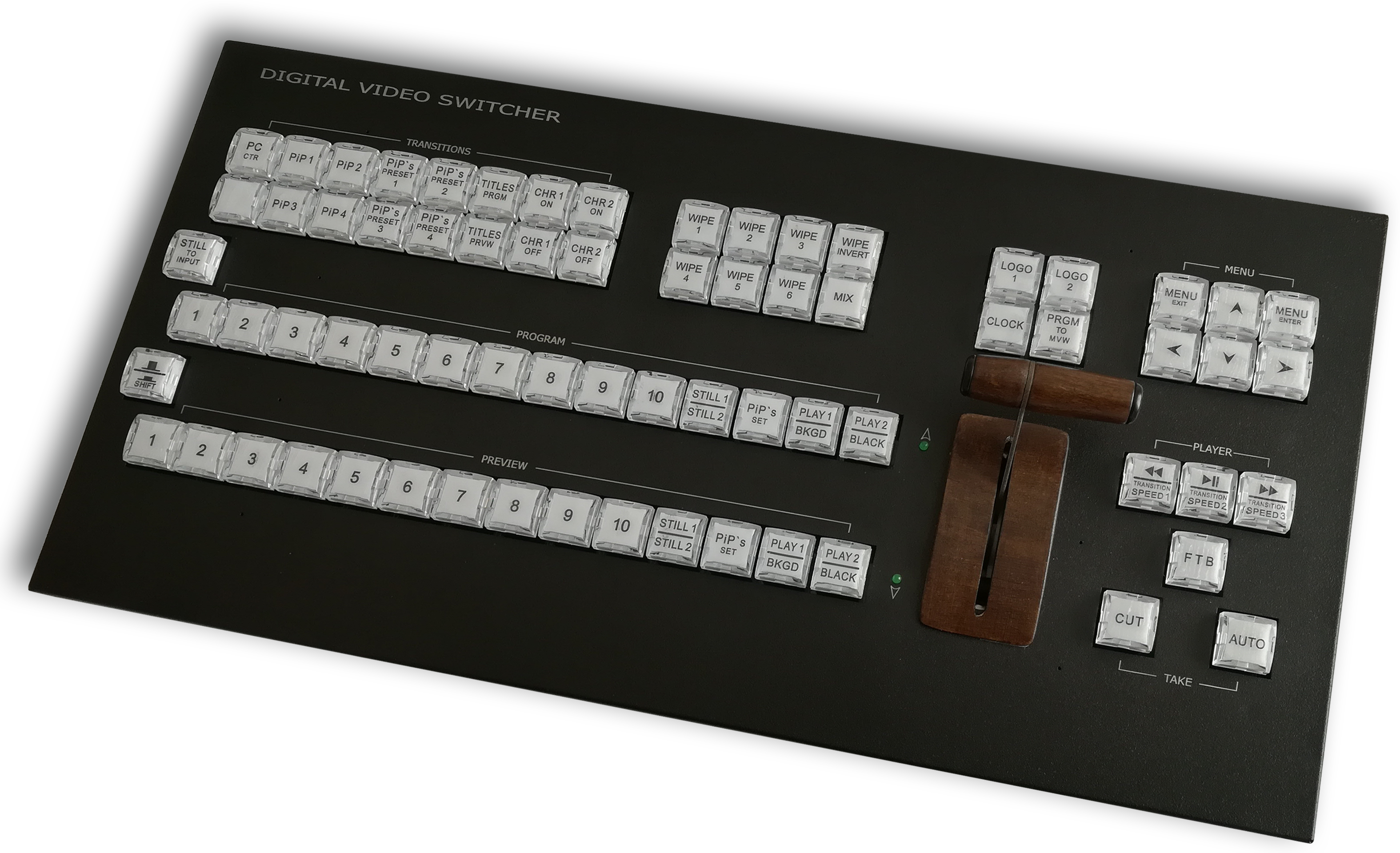 2 still pictures can be assigned to two buttons of the console (“Still 1” and “Still 2”) and used as 2 independent internal signal sources. As still picture you may use any image in JPEG, BMP, PNG, TGA format with a size of 1920×1080 pixels. Up to 32 slides can be stored in the SD card.

The functionality of the video mixer console: provides direct access, control, switching and other settings with each external and internal signal source of video mixer (the software console has similar functions; convenient position and size of each source, preview and program windows with nice and handy GUI ensure the intuitive and fast operation with Video Mixer / Switcher HD v1).

There is more detailed information about Video Mixer / Switcher HD v1.0 on the ROKS website, where you also can contact technical support.