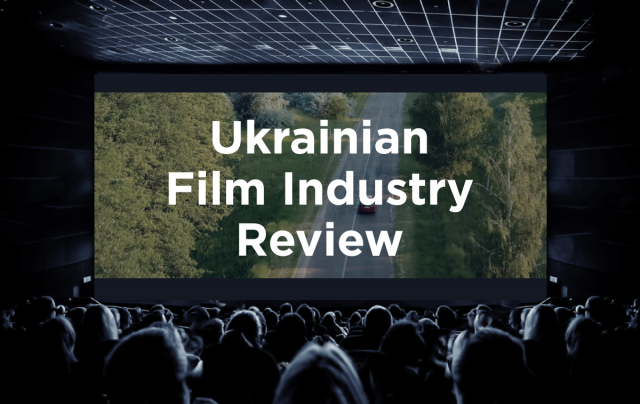 The system of the film industry support was changed in the tax sphere as well: film screenings and the distribution of national and international films, which are dubbed into Ukrainian language are VAT-free until January 1, 2023. And many goods and services usually imported for the film production are free from value added tax too.

294 movies (including animation films) and 29 thematic collections were released in Ukrainian cinema theaters in 2017. 22 films were made in Ukraine or in a co-production with Ukraine. Ukrainian films earned about $3.58 million with the number of viewers reaching 1.389 million in 2017, the data shows.

Feature films production is also on the rise in Ukraine (due to the state financial support increase). If in 2011 Ukrainian cinemas released only one locally produced film, in 2015 there were already 29 releases of local origin. According to the Ukrainian State Film Agency, in 2018 this number will grow to 49. The most important trend is not the quantity increase itself but growing interest to Ukrainian films among cinema-goers that results in new box-office records. For instance, in 2017 four local releases earned about 20 million hryvnas (about $770,000) each: comedies ‘Servant of the People – 2’ produced by Studio Kvartal 95 and ‘DZIDZIO Contrabass’ by Solar Media Entertainment, war drama ‘Cyborgs: Heroes Never Die’ by Idas Film and family fantasy ‘The Stronghold’ by Kinorob (FILM.UA Group). This year Ukrainian-Latvian comedy ‘The Svingers’ by F Films and Platforma Filma earned more than 22 million hryvnas (about $840,000).

At the beginning of March 2018, feature animation ‘The Stolen Princes’ by Animagrad Animation Studio (FILM.UA Group) set a new record for the national movie premiere box-office, having earned 21.5 million hryvnas (about $820,000) at its first weekend. As for now the local animation box-office is about $1.37 million.

‘The Stolen Princess’ is the first animated feature film made for the Ukrainian and international distribution in the production line of the animation studio Animagrad. The project grossed a box-office of near $1.37 million in local cinemas, was successfully released in Turkey, Romania, Bulgaria and Croatia and is pre-sold to more than 50 territories – China, South Korea, France and French-speaking countries, Poland, Israel, Germany, Austria, Switzerland, Lithuania, Latvia, Estonia, as well as countries of the Middle East and North Africa. Another animation in Animagrad’s lineup – “Mavka: The Forest Song” – is also travelling global and is interesting for many foreign buyers (the project is set to premiere in 2019).

Due to vast variety of locations, low production costs, professional and skillful production crews Ukraine attracts a lot of foreign producers as ‘that very place to film in’. For the last 20 years more than 50 international and foreign projects were filmed here (excluding Russia-produced projects). Among the most noticeable one should mention “Sharpe’s Honour” and “Sharpe’s Battle” (1994-1995, USA) with Sean Bean, “Black Sea Raid” (1997, USA), “The Legend of 1900” (1998, Italy), “House of Flying Daggers” (2004, China, Hong Kong), “Bitter Harvest” (2016, Canada) and many others. It’s obvious that after introducing cash rebates for foreign filmmakers and enforcement of international co-production agreements Ukraine will have more chances to be reliable and comfortable co-production partner rather than just service base for international producers.

Recently such well-known world filmmakers as Agnieszka Holland (director of ‘Gareth Jones’, 2018), Jean Reno (starring in ‘The Last Step’, 2019), Thierry Arbogast (cinematographer of ’The Last Step’, 2019) and others have come to Ukraine to film various projects.

The number of international co-productions released in the cinemas of Ukraine rose significantly in 2017, while the number of those with Russia decreased from 2 to 1. The most remarkable due to the number of foreign co-producers are three – ‘A Gentle Creature’ by Sergei Loznitsa, ‘Čiara/The Line’ by Peter Bebjak and ‘Frost’ by Šarūnas Bartas.

‘Čiara’ is the co-production of Ukrainian GIMG and Slovak Wandal, RTVS and HomeMedia, while ‘Frost’ was made by InsightMedia and Tato Film (Ukraine), Studija Kinema (Lithuania), KinoElektron (France) and Donten & Lacroix Films (Poland) with support of the Lithuanian Film Centre, Polish Film Institute and TV broadcaster Arte (France).

After a record-breaking opening that saw ‘Čiara’ hit the number one spot at the Slovak box-office, the film was still in the top-20 with 325,000 admissions after 14 weeks in release. It was also selected for the Best Foreign Language Film for Oscar, but not nominated. ‘Frost’ was chosen by French website Libération as one of the twenty must-watch films for 2017, screened in the Directors’ Fortnight section at the 2017 Cannes Film Festival. And just like ‘Čiara’ it was selected as the entry for the Best Foreign Language Film for Oscar.

In 2017 the films made in Ukraine or in a co-production with Ukraine participated in many foreign film festivals, including ‘A’ category. The film ‘Frost’ by Šarūnas Bartas was screened at the Directors’ Fortnight, which is an independent section held in parallel to the Cannes Film Festival. And ‘A Gentle Creature’ by Sergei Loznitsa entered the main competition program of Cannes Film Festival.

Here’s the list of the winners: the documentary ‘Rodnye’ (Close Relations) directed by Vitaly Mansky got the main prize of the 13th Crossing Europe Film Festival Linz held in Austria; Ukrainian-German documentary ‘School Number 3’ won on Generation 14 plus section of Berlinale in Germany; ‘Čiara/The Line’ won on 18th Arras film festival in France and took the best director’s prize on Karlovy Vary film festival in Czech Republic; ‘Vypusk ’97’ (‘Graduation`97) by Pavlo Ostrikov won Best International Short Film Leopard from Cinema & Youth Jury at Locarno film festival; ‘Pryputni’ by Arkadiy Neputalyuk won the best director’s prize in the full-length features section of the International Festival of Red Cross and Health Films; ‘5 Therapy’ by Alisa Pavlovskaya was mentioned on 32nd International film festival in Mar del Plata in Argentina; the short meter debut ‘Out of Service’ (Tekhnicheskiy Pereryv) by Filipp Sotnichenko won in the POFF Shorts International Competition Sleepwalkers in Tallinn. And this is not the whole list.

Also, Ukrainian projects won on several international pitchings. For example, ‘The Floor is Lava’ (Stop-Zemlya) by Ekaterina Gornostay took the Grand Prix of ConnectingCottbus film forum in Germany. And this is the same place where Yaroslav Lodygin’s film ‘The Wild Fields’ (Dyke pole), an adaptation of ‘Voroshilovgrad’ novel by Serhiy Zhadan took the Work in Progress prize (for films in production).

In addition, the active promotion of Ukrainian films abroad has been started. The stands were open on the film festivals in Toronto, Berlin and Clermont-Ferrand (for short projects). The pavilion was launched on Annecy International Animation Film Festival and its Market (Mifa) for the first time, and for tenth time already it was open on Marche du Film in Cannes.

This year, Ukrainian feature film ‘A Woman at War’, directed by Benedikt Erlingsson, will be premiered at the Cannes Film Festival. The film is a co-production of France, Iceland and Ukraine and supported by Ukrainian State Film Agency. The premiere screening of the film will be held in the course of the ‘Semaine de la Critique’ competition program, which is one of the oldest sections of the festival. The Ukrainian film industry will also be represented by the National Pavilion on the festival’s film market Marché du Film.

Also, Ukrainian director Sergei Loznitsa’s film ‘Donbass’ has been selected for the Un Certain Regard section of the 71st Cannes Film Festival (2018). It will also be the opening film of the section.

Un Certain Regard is the section of the Cannes Film Festival. Among its winners are Wim Wenders, Kim Ki-duk, Yorgos Lanthimos and other indie film stars.

The breakthrough of Ukrainian film industry could be seen in several areas. First of all, the legislative basis has totally changed. Secondly, lots of films supported by the state were released. In fact, it was the first time when we had a proper releases’ plan in autumn. It is due to this cumulative effect that we managed to turn the attention of society to Ukrainian films, the process of demarginalization, so to speak, started.

Our films are presented almost on all world’s festivals. The three movies produced in Ukraine and co-produced with Ukraine were nominated to Oscar 2017 at one time. Ukrainian movies get on the competition lists of A-rated film fests. There are only 15 such festivals around the world and our movies participated in 7 of them – in Cannes, Berlin, Locarno, Warsaw, Tallinn, Karlovy Vary and Mar del Plata. And also Rotterdam, which is very prestigious festival, while it is not A-rated however. We had a stand in Toronto for the first time, we participated in many film markets. We have a lot to surprise with. This is the revival of Ukrainian film industry, it’s a new wave.

2017 was probably the best year for national film industry within the whole period of the independent Ukraine – a record number of movies were released in cinemas.

The last year proved that not only European co-productions (‘A Gentle Creature’ by Sergei Loznitsa and Benedikt Erlingsson’s ‘A Woman at War’) can be of interest at this time, but our own films may be successful as well. For example, with 310,000 tickets sold ‘DZIDZIO Contrabass’ earned 22.15 million hryvnas (about $850 thousand) in 13 weeks and covered the expenses. The film industry in Ukraine can be finally called business.

Ukrainian film industry is on the rise. The volume of content is increasing, so does its quality. Several Ukrainian movies showed good results in the national box-office, and the interest of Western partners for Ukrainian animation, the international distribution of our films and making co-productions with us have risen significantly. Several large-scale projects with world-known directors and actors on board are planned for 2018. Ukraine has become the top place among European countries as for production quality-to-price ratio.

For the First Time Ever: How Ukrainian Hoster Blocked Pirated Content