Home Business Tram #5 is sent to the Anti-gravity route, the end station is... 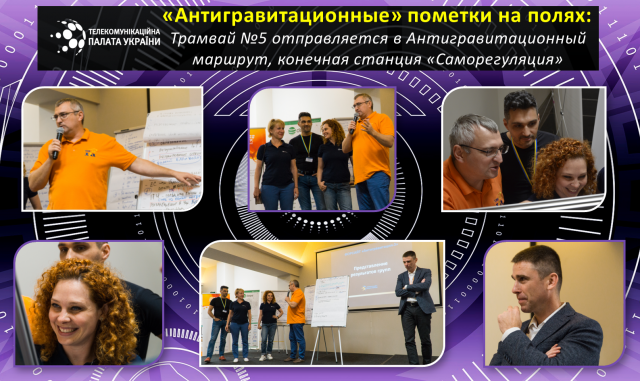 The Telecommunications Chamber of Ukraine continues to share smart thoughts from the foresight players “#Antigravity_3: a jump into the future”. Well, as you may have guessed, today the story` will be devoted to one of the most difficult and controversial topics. Why ambiguous? Because the question “Do industries need regulation and, if so, to what extent?” can be discussed endlessly and everyone has an opinion on this matter.

But the team “Tram #5” was able to combine five different opinions into one, while not forgetting to use optimism, imagination and creative approach. First of all, I would like to introduce you creative players of the team: Victoria Troshchenko (UCRF), Alexander Fediyenko (InAU), Valeria Dyachenko (Juscutum), Konstantin Novitsky (Cosmonova) and Alexander Savchuk (Atracom) – the team leader.

The presentation of the team’s results began (as for me) with the key phrase: “Thinking about the future regulatory field now is a thankless task, because then we will have to create it or bring about changes by ourselves.” But, on the other hand, water does not flow under a still stone, and it is quite possible that Tram No. 5 will become a locomotive of regulatory changes, and this publication will become its roadmap 😉

The team radically changed the concept of the game and turned all the tasks on its head, but in our industry work creative individuals, they are artists and they see it. So let’s go!

About the task “Describe at least five of the most significant changes in the international regulatory framework (both at the EU and in the whole world) that are supposed to occur in the next three years and will significantly affect the entire telecom market” the team worked like this:

At that, the phantasmagoria about the enslavement of the international legislative arena is over, we are moving on to more mundane things, or rather, to an internal regulatory policy.

The team had another task – to name at least three of the most significant laws of Ukraine, which will be adopted within three years and which will entail changes for participants of the telecommunication services market until 2025. According to the team it`s:

Pass laws on lobbying and self-regulation. According to the team, this is the foundation for the further development of the industry. As a proof, a specific example was given: Ukraine has been building 3G and 4G communications for so long, because this issue is highly regulated, and for activities related to broadband access, there is no such crazy level of regulation, so the territory of Ukraine has fairly good coverage by fixed wired communication.

And finally, the players had to name at least three decisions of the executive authorities and / or regulator (s) in Ukraine that will occur within the next three years and which will affect the telecommunications providers before 2025. The proposal of the team looked like this – creating a legal springboard for:

These were the results of the game of the “Tram number 5” team. As Alexander Fediyenko said, the game is a game, but if you wish, any fantasy can come true, everything is in our hands!

And by tradition, we sincerely thank our players! Creating or changing the regulatory framework is an untapped field in which there is work for everyone, so we will meet with Tram #5 more than once;)

For the First Time Ever: How Ukrainian Hoster Blocked Pirated Content