During 2015 we have been discussing changes in the satellite Pay TV market. DTH platform Extra TV disappeared and then it was renewed by Media Group Ukraine. There is only one satellite TV provider beside it, Viasat. As a global satellite operator, Eutelsat is paying attention to Ukraine. Mediasat became the first media to interview Eutelsat’s representative in May 2015. Eutelsat’s main objective is to successfully launch Eutelsat E9B satellite that will address Ukraine. It is scheduled on January 30th 2016.

What are Eutelsat’s plans in Ukraine?
We are promoting a new orbital position for Ukraine. This is 9 degrees East and not 36 degrees East as we did in the past. Why we propose 9˚? Because, our new E9B satellite has been designed for Ukraine, with a particularly powerful beam over the country. What makes it different from all other satellites that cover Ukraine is that we can combine TV together with internet services thank to our High Throughput broadband satellite KaSat that coexists at 9 degrees. Another important aspect of it is that can be combined with our HOTBIRD flagship position that is already being received in Ukraine. 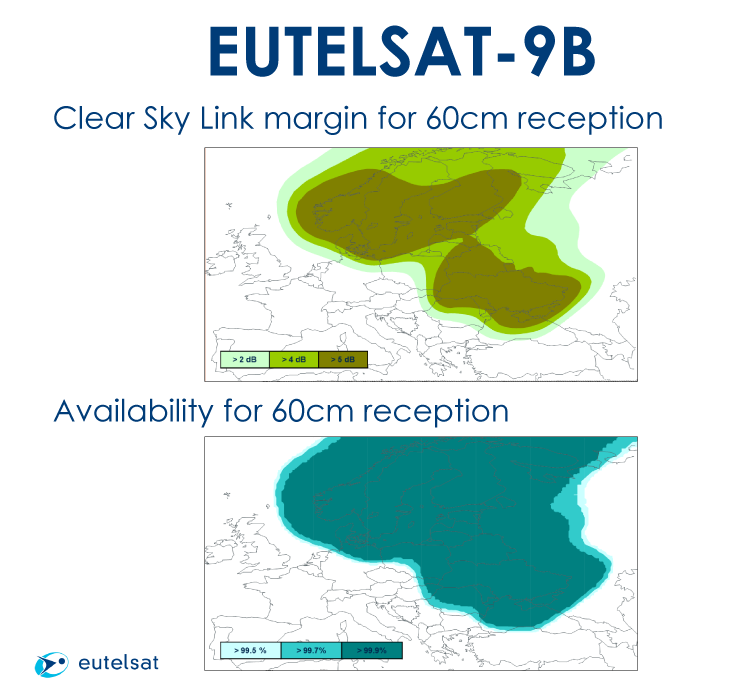 What about your plans for the DTH-platform?
Generally speaking, It makes perfect sense as in the current environment there is already Pay-TV. For DTH however, there are certain actions that need to be taken by media stakeholders towards encrypting TV channels. Today there is only Viasat but nothing prohibits another operator to enter the market, the number of households is high. Ukraine is a large country comparing to other European countries with a specific rural demographic situation. We are in a planning phase right now. When I have more to tell you I will. Some of our plans depend on whether there will be encryption of the TV signals.
We demonstrated our equipment for triple-play reception from Eutelsat 9B during several exhibitions in Ukraine last year. This service is available, all you need is an antenna with dichroic sub-reflector, set-top-box, and you can have access to TV and internet simultaneously. We are open for partnerships.

What kind of partnership are you looking for?
We are open for partners to create together an attractive Pay-TV value proposition based on best quality and service for the viewers. Except the new satellite, such participation can be commercial, technical or other.
To be honest, we are not interested in another distribution platform. We wouldn’t like to offer to the market just another satellite capacity and destroy market value. We can also provide the opportunity for Ukrainian channels to use our satellite fleet and go outside Ukraine, to Latin America, Asia. Eutelsat is really global.

How Eutelsat is different from other operators in providing services for channels?
Eutelsat is not just adding satellite capacity over Ukraine. We are the leading European satellite operator for Direct-to-home (DTH) broadcasting and a key player in professional broadcasting. We address globally 274 million homes and broadcast over 5800 channels. Some of the most successful pay-TV platforms in CEE have chosen Eutelsat for its flexibility, technical excellence and continuous support. This support goes across all levels of operations business and finance. Channels chose Eutelsat satellites for their European and worldwide distribution. The most prominent DTH and cable networks receive multiple Eutelsat satellites. It is not unfair to say that with Eutelsat, TV channels have bigger chances to achieve their distribution targets faster.

Is it difficult to move to another satellite?
Nothing is impossible and Ukraine is a good example. There is a big number of antennas 3 – 4 million, receiving signals from three positions (4°W Amos, 5°E Astra 4A, 13°E Hot Bird). The market is split. People are mostly watching FTA TV. This creates a lot of problems for the business but if the market tomorrow transforms into satellite Pay TV they will find the resources for it. People are ready to pay for something they value. We have seen that in every other European market. So at the end is not difficult to start getting signals from 9°E.

When can this new service start?
We already provide internet and as we launch Eutelsat E9B Triple play may happen tomorrow.